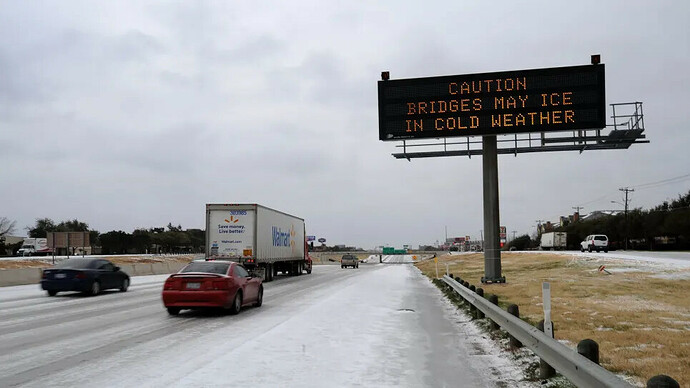 In a turn of events that will surprise exactly no one at this point, a large swath of the United States is currently experiencing an extreme and unprecedented weather event.

A record cold snap has borne down upon some 25 states, paralyzing parts of the central and southern U.S. that just aren’t used to getting regularly buried by terrifying winter storms in the same way the northeast is.

Texas is being pummeled particularly hard: According to poweroutage.us, a utility tracking site, more than 2.8 million of the state’s residents were without power as of 1:30 p.m. local time, the result of a surge in power demand as desperate folks scrambled to turn on the heat.

According to KWTX, a news service serving central parts of Texas, some parts of the state were hovering at around 15 degrees Fahrenheit on February 14 — three degrees colder than the temperature in Anchorage, Alaska. On Monday, the National Weather Service Weather Prediction Center warned of an “Arctic chill” permeating the Great Plains and announced that Houston had hit an all-time temperature low by clocking in at just 17 degrees, breaking the record of 18 degrees previously set in 1905.

In an interview with The Dallas Morning News, Matt Varble, a resident of the Dallas-area suburb of Las Colinas, said that his power had already flickered out several times on Monday morning and still wasn’t back on.

“It’s starting to get very cold inside my house,” Varble told the paper. “I lived in the north for a very long time and nothing like this has ever happened when I lived in New York, Ohio and Illinois.”

On Saturday, Governor Greg Abbott had warned that the “unprecedented” storm the state was bracing for would “make movement virtually impossible,” and added that “what becomes frozen will remain frozen for a long period of time.”

Sure enough, Sunday’s snowfall and freezing rain quickly turned into Monday’s icy aftermath, and the roads blanketing Texas are currently a disaster. Although Texas isn’t due for much more snow, a large path across the U.S., from Mississippi and Ohio Valleys to the Northeast, is expected to receive 6 to 12 inches. Tuesday’s weather forecast for New Orleans predicts a high of 38 degrees — a temperature that would tie 1899 for the coldest Mardi Gras ever recorded.

All told, more than 150 million people along a 2500 mile stretch of land across the U.S. are currently under dangerous winter weather alerts. It’s the type of “unprecedented” weather pattern that’s becoming more and more… precedented… in America by the year, and it deserves our attention and concern.