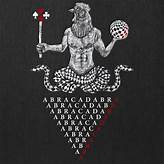 Abraxas (Biblical Greek: ἀβραξάς, romanized: abraxas , variant form ἀβρασάξ romanized: abrasax ) is a word of mystic meaning in the system of the Gnostic Basilides, being there applied to the “Great Archon” ( megas archōn ), the princeps of the 365 spheres ( ouranoi ).[1] The word is found in Gnostic texts such as the Holy Book of the Great Invisible Spirit , and also appears in the Greek Magical Papyri. It was engraved on certain antique gemstones, called on that account Abraxas stones , which were used as amulets or charms.[2] As the initial spelling on stones was Abrasax (Αβρασαξ), the spelling of Abraxas seen today probably originates in the confusion made between the Greek letters sigma (Σ) and xi (Ξ) in the Latin transliteration.

The seven letters spelling its name may represent each of the seven classic planets.[3] The word may be related to Abracadabra , although other explanations exist.

There are similarities and differences between such figures in reports about Basilides’s teaching, ancient Gnostic texts, the larger Greco-Roman magical traditions, and modern magical and esoteric writings. Speculations have proliferated on Abraxas in recent centuries, who has been claimed to be both an Egyptian god and a demon.[